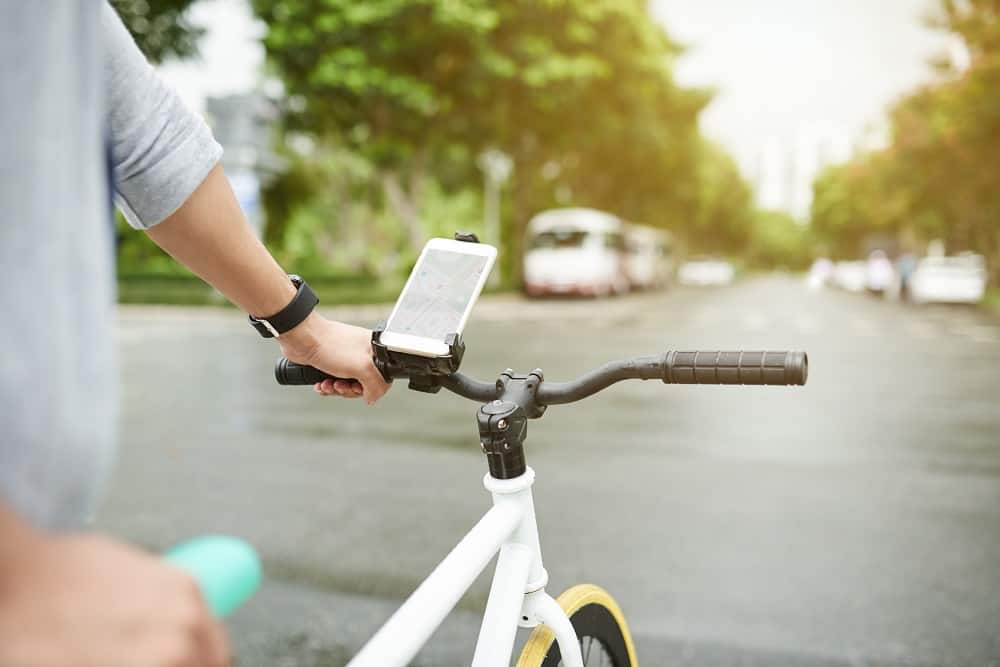 When you’re cycling, a small and cheap cycling computer is typically all you need to display your most important data such as speed, pace, distance, and time. However, most modern smartphones are also capable of giving you this information with a little bit of third-party help. So, which one should you ultimately choose? Should you save a little money and use your smartphone as a cycling computer or should you opt for the smaller, more user-friendly and aerodynamic cycling computer?

The debate on cycling computers vs smartphones has been going around ever since smartphones got advanced enough to track your cycling sessions. While there isn’t any definitive answer to it, we can easily compare both devices in terms of their features and see which one will come on top and most importantly – which will fit your needs better.

If you’re looking for a third alternative, I suggest checking out my detailed guide on the best fitness trackers for cycling. There, I’ve listed the top models for this year as well as the numerous features that you need to take into account when buying one.

When it comes to comparing the two devices, we must take a detailed approach and size them up based on all their common features. Only that way we will be able to objectively determine which one is best for you and draw our conclusions at the end of the article. Here are all the features that we will be comparing:

In terms of the dimensions, cycling computers have a clear-cut advantage. While there are some compact smartphones, they are still nowhere near the size of the average cycling speedometer. That is, in fact, one of the main disadvantages of the smartphone – it is just too big. This creates a whole range of issues for people that want to use their smartphones. The size will also affect other features which we will discuss in a moment, one of the most important ones being aerodynamics.

The durability of both of these devices greatly depends on their price. Obviously, the more expensive a smartphone is, the more durable it will be. Still, smartphones are typically made out of glass these days and glass is glass and glass breaks. It is only fair to compare them in terms of their durability only if you worry about accidentally drop one of them. Since bike computers will rarely be picked out of their holder on your bike’s front bar, there isn’t much of a concern about their durability. Smartphones, on the other hand, might get picked up, especially if you stop and pick up a call or want to type in something with both your hands.

Bike speedometers typically have small displays while modern smartphones all have 5-inch displays or bigger. On top of that, smartphones have colored displays which offer a ton more real estate for various functions and graphs. Still, if you’re only getting a speedometer for its basic functionality, its LCD display will be clearly visible in most cases. That isn’t even taking into consideration that there are some cycling computers which are quite large and have night-time modes to illuminate the display. Smartphones don’t have to worry about cycling in the dark as they are all backlit and the ones with LED displays have the option to turn all their unused pixels off, leaving you with the illuminated numbers only.

To learn how speedometers work and what other features they can have, make sure you head over my guide on the best bike speedometers. Now, let’s compare these devices’ performance…

The performance is where it’s all at. Bike computers have the advance of being super fast and really reliable. Part of that is due to their simple nature and external sensors that they rely on. In other words, it isn’t hard to put out a great performance if the device is tracking only a few metrics. The more expensive both devices get, the more complicated their functions will get and this is where smartphones take a slight edge. While premium bike computers have decent performance and good usability, smartphones are just built for that and will give you a lot more to work with on an already optimized software such as Android or iOS.

Furthermore, there are countless of good cycling apps for mobile phones with each of them having a myriad of functions and features to help you track your cycling session. Bike computers, on the other hand, are limited by their software and to get a top-shelf performance you will need to pay a big chunk of money which works in favor of smartphones even more. 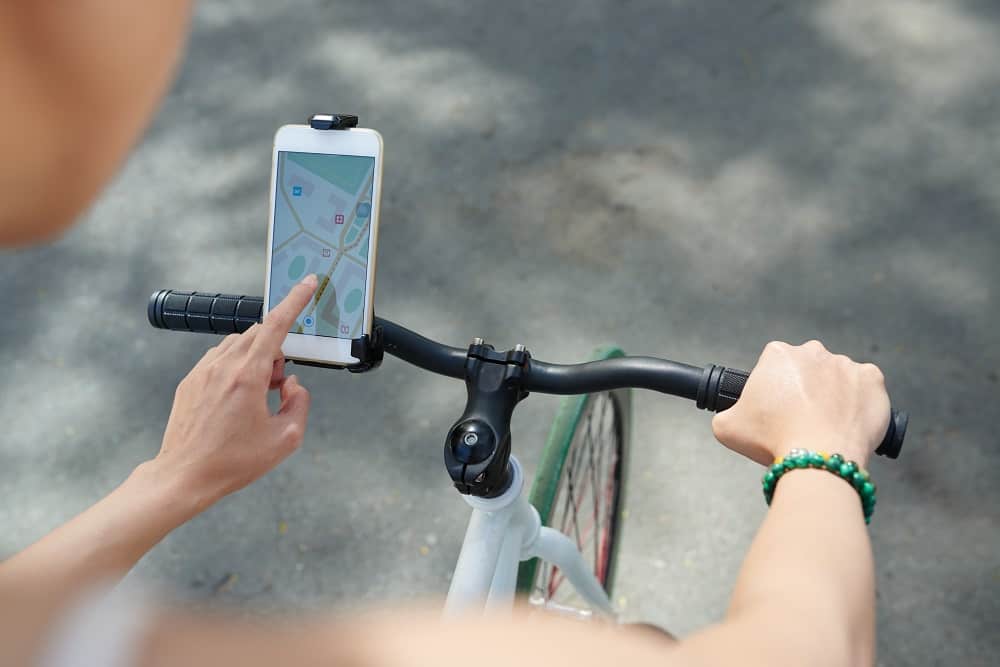 The tracking accuracy of cycling computers and smartphones nowadays is mostly identical. Only the higher-end cycling computers will have GPS tracking abilities and those typically match the ones of the smartphones. That is why this can easily be a tie since they all use the same technology. The way the information is given to the user, however, might give a slight advantage to smartphones due to their bigger and brighter displays. If a smartphone is geo-locating solely based on its mobile connection, you might experience tracking issues in secluded areas. This is where purely GPS-powered trackers will excel. Also, most premium cycling computers use their sensor information from the bike (speed, tempo, distance, etc) and implement it with their location algorithms to give you an even more precise location tracking and can even save battery.

If you want to learn how to get faster at cycling click here!

This one clearly goes to cycling computers. They are often quite primitive in their energy demands and can last months, if not years with a single battery (or batteries). However, the moment we start going up the ladder, cycling computers with GPS tracking options will drain their batteries much faster. Smartphones also won’t last you more than 5-6 hours of continuous tracking. As I mentioned earlier, some advanced computers will mix up the data they’re receiving from the GPS signal and their sensors on the bike to only retrieve GPS information every other second or minute. That way, instead of tracking every second, it can track on certain intervals and predict your location during the pauses based on the data it gets from the speed sensor. Smartphones don’t have that privilege and can only get their information from the GPS signal, so if you choose longer intervals, you risk getting wrong route information.

Having an official IP rating for water and dustproofing is a characteristic of most modern phones. They can typically withstand light rain, water splashes and dirt. While the average cycling computer won’t have an IP rating, they are fairly weatherproof and can hold up their own against nature’s elements just fine. More expensive models will have waterproofing and will be able to endure a rainy ride.

This should be one of the key deciding factors if you’re an experienced cyclist. The faster you go, the more you realise that aero is everything in cycling. Smartphones are just too big and they will often cause wind turbulence on your bike’s front bar while cycling computers are small enough to barely make a difference. Larger computers will have special aerodynamic designs.

If you don’t want your smartphone to stick out too much from the frame, you can use it horizontally which in most cases will make it as compact as a cycling computer in terms of aero.

The price is a hard category to measure them by. The main reason for that is that there are cheap cycling computers and there are some really expensive ones. The same goes for smartphones. The key thing to mention here, however, is that if you already have a good enough smartphone to run your cycling app, you won’t need to invest additional money for a computer. All you will have to buy is a steady phone holder for your bicycle.

Other features and accessories

This category clearly goes to the smartphone which is packed full of additional features such as listening to music, watching video tutorials and instructions on your riding workout, having the ability to take calls while riding, and so on. Furthermore, some speed sensors also have Bluetooth connectivity which can pair up with any compatible smartphone, giving a further edge to phones here.

If you are new to cycling, you should learn which are the common cycling injuries and most importantly – how to prevent them. Click here to read more on the topic.