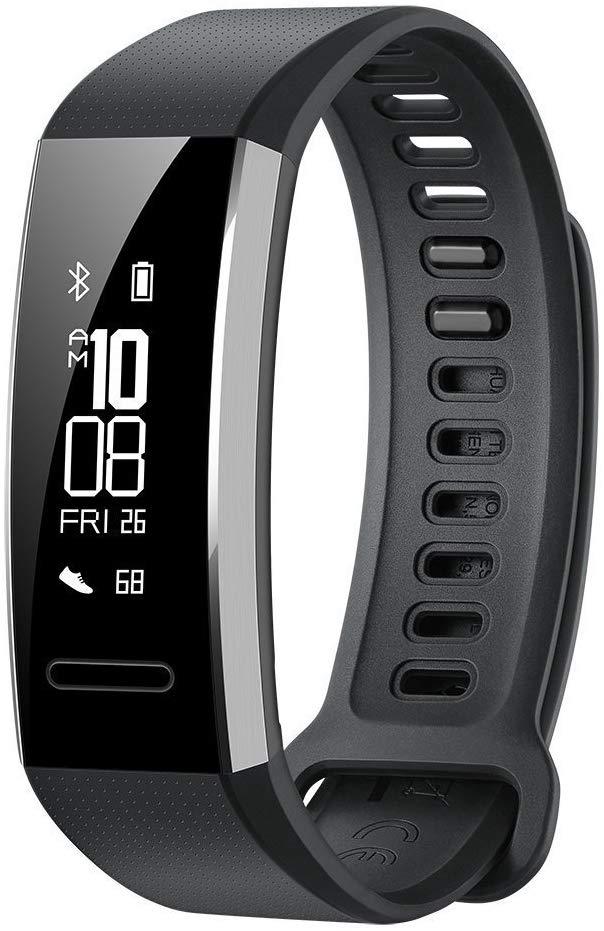 Despite the recent controversies, Huawei still remains one of the top manufacturers of smartwatches and wearable tech. The Huawei Band 2 Pro all-in-one activity tracker is one of the top-selling models worldwide thanks to its bargain price. But does that low price tag reflect a similarly low performance? While it isn’t a great option for runners, it still remains one of the best waterproof fitness trackers you can get for swimming when you are mainly accounting for the price-to-value ratio. Other, slightly more expensive trackers, really do blow this thing out of the water with their performance.

My verdict: While packed of features, this Huawei tracker isn’t going to impress you with the accuracy of its sensors. Even though I like the design, I cannot close my eyes to the clasp mechanism which simply isn’t reliable enough and often comes off from normal activities like putting your jacket on or simply leaning onto a counter. While the price is good, the functionality seems pointless when there are roadblocks which the tracker cannot push through. The battery life and GPS-tracking are really good, though, which might just be some of the redeeming features of the watch.

Read on to see my full overview of all of the features of this tracker and learn how it stacks against its competition.

Being in the same ball-park as the Xiaomi Mi Band 4, this tracker really doesn’t have any excuses when it comes to its poor performance in certain situations. Granted, the budget trackers sector is full of hit-or-miss products but this one is perhaps the one with the highest potential and lowest execution. Let me elaborate on that…

The heart rate sensor is accurate enough when you aren’t engaged in any heavy physical activity. Once you start training, though, things get a little inaccurate, to say the least. With just a bit of sweat, the HR sensor starts showing widely swinging results and at that point, it becomes unreliable enough for you not to trust it. Swimming tends to be easier for the tracker for some reason but you will have to tightly fit it on your wrist, which is a hard job on its own. Still, for people that just need a basic activity tracker, this will count steps, calories burned, and distance travelled quite well, especially with the GPS on. On that note…

There is GPS tracking here which works relatively well, even when put side by side with more expensive Garmin watches. The issue is that with the GPS on, your battery life is significantly reduced just to a mere few hours. If you don’t want to drain the battery, you can use the GPS signal from the phone and use an application like Strava, for instance.

There is no altimeter here, meaning the GPS will struggle with elevation changes, although it will mark them occasionally. That isn’t great for bikers since this data is important to them. Either way, the GPS will drain the battery life faster than your workout anyway, so it is rendered pointless.

Apart from those, sensor-wise it also has a 3-axis accelerometer and infrared wear sensor. I honestly didn’t expect much for this price, and this seems adequate enough.

The Huawei band 2 Pro does indeed track your sleep and it does a great job at that unless it falls off your wrist which will happen often if you are an active sleeper. While it is recording, though, it will measure your sleep stages duration and will track light, deep and REM sleep. The data will be then given on the display or you can view it on the mobile app if you’ve synced your band 2 pro to your phone. 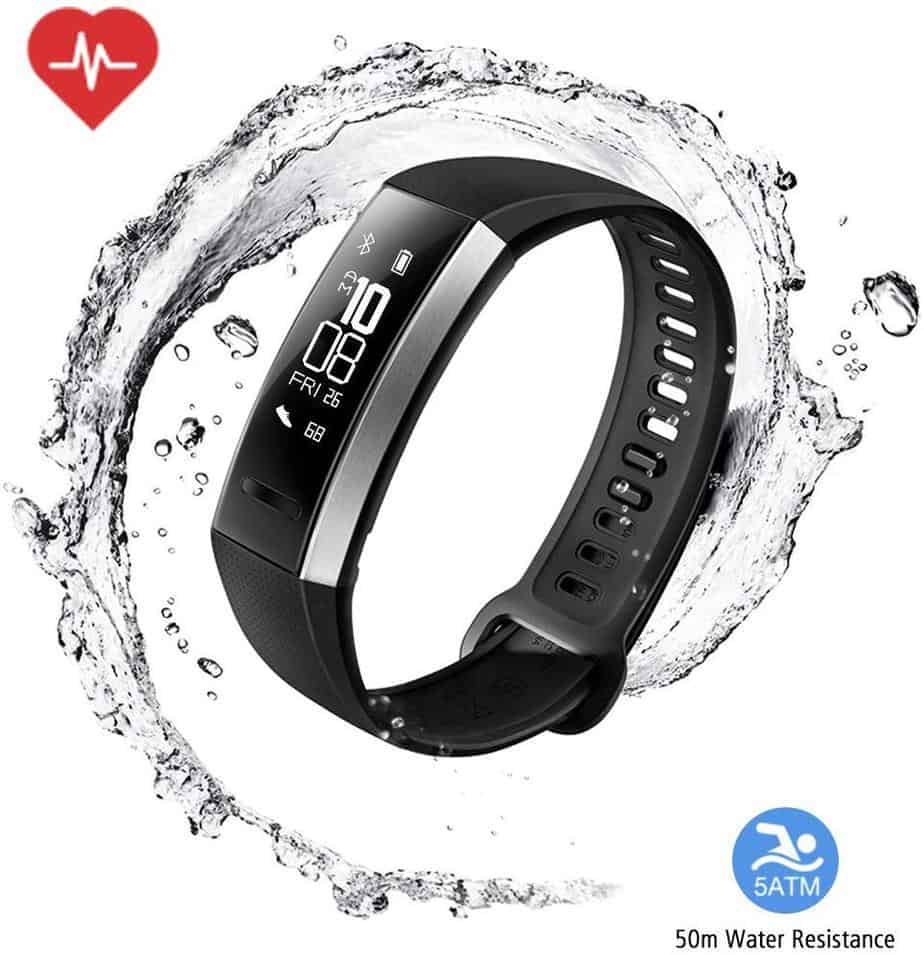 I have to give the team at Huawei 10 points for design and aesthetics, although that isn’t necessarily on par with the practicality. While the wristband is nice and soft, the clasp mechanism is just bad. I am praising them for trying something new but boy did they fail. It comes off from simple things like putting your jacket on and it struggles to stay on your during the night, especially if you are an active sleeper.

Other than that, the main body frame around the display does a great job at protecting it and looks really well. The whole unit weighs just 32 grams which makes it one of the lightest trackers out there.

The display is a 0.91 inch 128 x 32 resolution PMOLED which has decent sharpness and contrast to it. It is a touchscreen with one large button at the base which controls the menu and other main features.

The issue many runners have with it is that it isn’t too bright when you are running under direct sunlight. Also, some of the stats displayed on it are just too small to be seen while you’re moving.

Huawei claims 3 weeks of battery life which is impressive but as they say, the devil is in the details. When you read the fine print, you will find out that this claim is based on 60-minutes worth of activity per week. Now, your physician would generally recommend 30 minutes a day, so you see where my issue is with this claim. When using it on a regular basis adding a workout here and there through the week, the tracker will last no more than 10 days, which is a far cry from their marketing assessment. Still, the 100mAh battery does last more than other trackers in this price range.

There aren’t many additional features here, which is expected for a budget device. The Huawei Band 2 Pro comes with a lot of interchangeable bands, though, which is a nice way to personalize things a little bit.

It also uses Bluetooth connection to show you notifications like caller ID, emails, text messages, and others when paired with your phone.

The Huawei fitness app isn’t great but it does an alright job at giving you all the vital information at a glance. One issue I have with it is that if you miss taking your tracker on a run, you won’t have the option to manually add the data later, which is a great deal-breaker for people that love to track their progress.

In terms of price, this tracker has very little competition, especially now that it is below 50$ which is a true bargain. Not so many models are as feature-rich at this price point which has always been the main goal of Huawei – make good-looking devices packed full of features at a low price. How well they perform under different conditions is a whole other story.

If you want to get into running and are wondering how to create a running plan or a weekly schedule based on your abilities, head over my detailed article on the topic to find out some of my best tips and advice!

As a conclusion I can say that the Huawei Band 2 Pro all-in-one activity tracker really didn’t live up to the hype around it and a lot of people were left disappointed. Many people bought it hoping for a well-performing GPS fitness tracker (finally) but they were left with a mediocre product that matched its price quite well. In other words, if you are really after the perfect tracker, then it might be a better idea to spend a little extra and get something from the big players such as Garmin, Fitbit, and even Samsung. As for now, Huawei doesn’t seem to be able to get their wearables right, even though their high-end smartwatches aren’t half bad. I gave it a four out of five stars rating mainly due to the poor HR tracking and the unreliable clasp mechanism.